The roofing assembly we've chosen is somewhat complicated.  Working from the bottom up, the first layer is the sheathing - in our case the red Zip board.  Properly taped, the Zip system should provide an air barrier that is the key to minimizing air leakage into and out of the house.  In the case of the roof, air leakage tends to be out of the house as the air pressure high in a house is greater than it is lower in the house due to the stack effect.

Later in the roof assembly screws will be driven through the Zip board and into the rafters below. Unfortunately this results in penetrations through the air barrier. To prevent this from compromising the air barrier we applied a layer of Ice and Water Shield - a membrane designed to seal around and nails and screws driven though it. 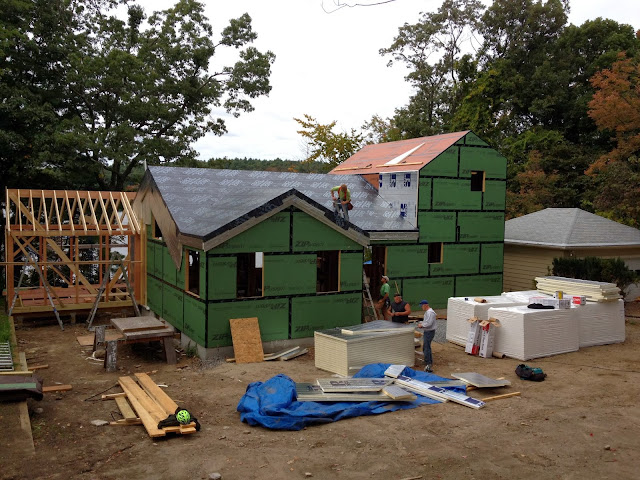 Above that goes 6" of rigid polyisocyanurate (polyiso) insulation which in our case means 3 layers of 2" thick boards. The insulation value of polyiso is generally quoted as R-6 per inch, so 6 inches will contribute R-36 to the roof.  If you want a sense of how complicated building science can get check out this paper that examines how the R-value of polyiso can vary over time and temperature.

One thing I would have done differently had I thought about it ahead of time, is to have spec'ed fiberglass-faced polyiso ather than foil-faced. The foil is a vapor barrier and will keep the roof assembly from drying to the exterior. Also the foil will hinder cell phone reception inside the house.

On top of the ISO goes another layer of sheathing, in this case just regular plywood. This will be the sheathing to which the shingles will be nailed. The plywood is attached with long structural screws that go all the way through the sheathing, the insulation and the original Zip board and into the rafters. You can see the heads of the screws in the picture below.  You can also see that there are quite a lot of them.  These are, of course, the aforementioned screws that required the Ice and Water membrane on the Zip board. 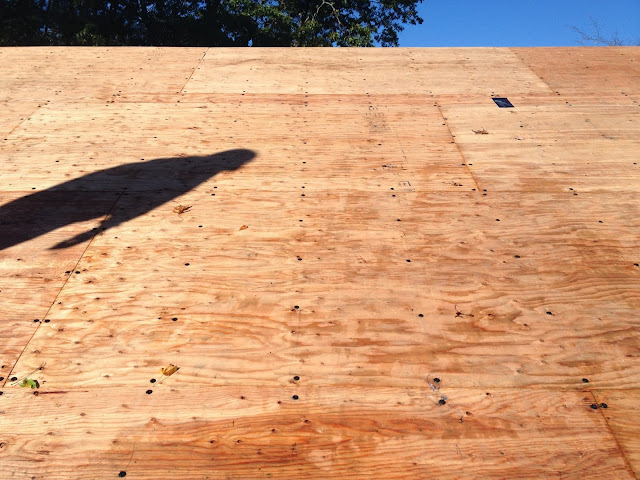 Now I'm lucky if I can hit a stud in a wall behind a half inch of drywall so how, you might wonder, do the carpenters manage to hit the rafters through two layers of sheathing and 6 inches of insulation? Well, it's a bit of an art, from what I can tell, and they do sometimes miss and have to adjust.

And therein lies the story of one of those moments of panic that, I'm guessing, happens in every custom building project. The plywood went up on a Friday. The next day it was raining and when I made my daily check on the house, the roof was leaking in multiple places! It appeared the Ice and Water membrane wasn't even sealing around the screws well enough to keep the rain out, let alone provide an air seal.  David assured me this wasn't normal and guessed that when some of the "screw misses" had been backed out, some of the holes that resulted had not been properly sealed.  On Monday, the crew went over the roof, found multiple such holes and sealed them.  Luckily it rained again that night, so we were able to determine that the leaks had indeed been fixed. 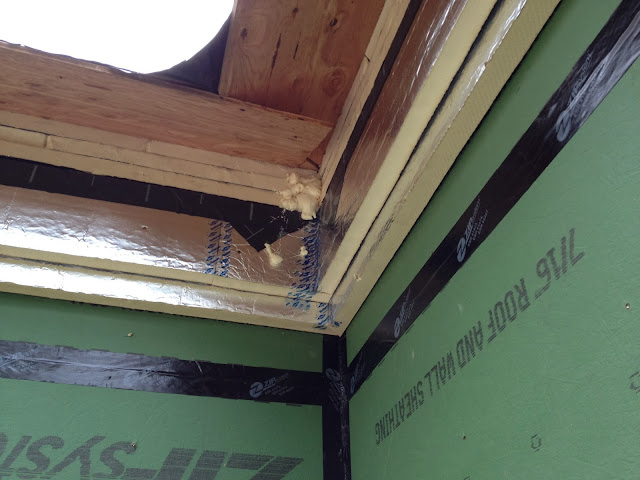 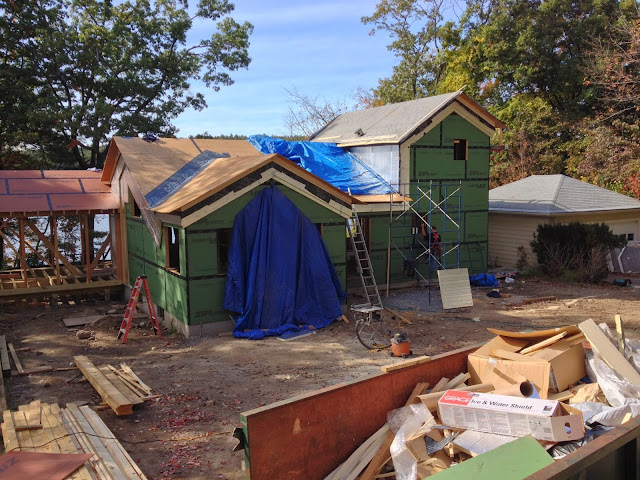 The leaks were gone but I still had a a concern about the screws that hold the plywood down.  Being situated on the east end of the lake the wind hits the house pretty hard.  During a big storm it's easy to imagine rain getting forced up underneath the shingles.  The screws are drilled tight to the plywood, but if water were to get under the shingles, I worry that water could wick down along the screws and get into the insulation. I'm probably being paranoid but I went ahead and had another layer of Ice and Water membrane applied to the plywood. 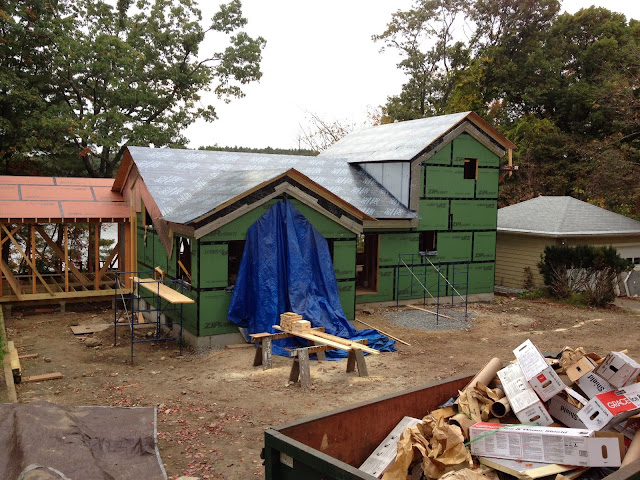